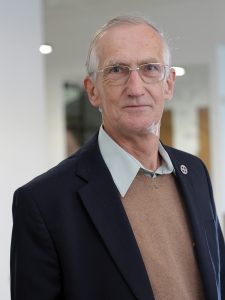 Dr Richard Clothier is a volunteer consultant to FRAME and was the founding Director of the FRAME Laboratory from 1997 to 2006.

Richard has been involved with FRAME for many years. From 1968 to 1972, he was a PhD student supervised by former FRAME Chairman of the Trustees, Professor Michael Balls, at the University of Anglia, where he worked on resistance to induced tumours in the South African Clawed toad, at the time used in pregnancy testing.

As FRAME became established, the FRAME Alternatives Laboratory was opened in the newly built University of Nottingham Medical School at Queen’s Medical Centre in Nottingham. Richard, who had joined Michael in Nottingham as a research assistant with a grant from the Cancer Research Campaign, look further to the basis for cancer resistance. Whilst there he secured a lectureship teaching anatomy to medical students.

Richard was central to the charity’s push for in vitro alternative assays to replace the LD50 animal tests for toxicity, and to establishing that for an assay to be validated, it needed to reliable, reproducible and relevant for the toxicity predicated. He also helped to influence the EU’s approach to animal testing.

Richard, who has also been a Treasurer and Trustee at FRAME, is passionate about developing in vitro alternative tests that are accepted as valid alternatives to animal testing.