Latest statistics on animal use for scientific purposes in EU

The European Commission has released its 2019 report on the statistics on the use of animals for scientific purposes in the member states of the EU in 2015-2017. The landmark review provides detailed animal testing statistics for each member state for the first time. FRAME explains the key findings of the report, and highlights the importance of working to develop and implement human-relevant alternatives to animal experiments.

Under Directive 2010/63/EU1, European Union member states have an obligation to collect statistical data on the use of animals in scientific research.

The European Commission aim to publish a report every five years to show ‘a total picture of all animals needed to support research and testing in the EU.’ The latest report, released on the 5 February 2020, covers the period 2015 to 2017 and includes data from all 28 EU member states at that time.

This is the first report to be produced under the latest Directive and includes more information than previous reports, such as data around the creation and breeding of genetically altered (GA) animals, the use of Cephalopods and the number and severity of procedures experienced by each animal. By providing this extra information, the European Commission aims to increase transparency and understanding of the current scale of animal use in scientific research and testing across Europe. Whilst this increased reporting requirement does make it more difficult to accurately compare numbers with previous reports, it will help shed a light on future trends. 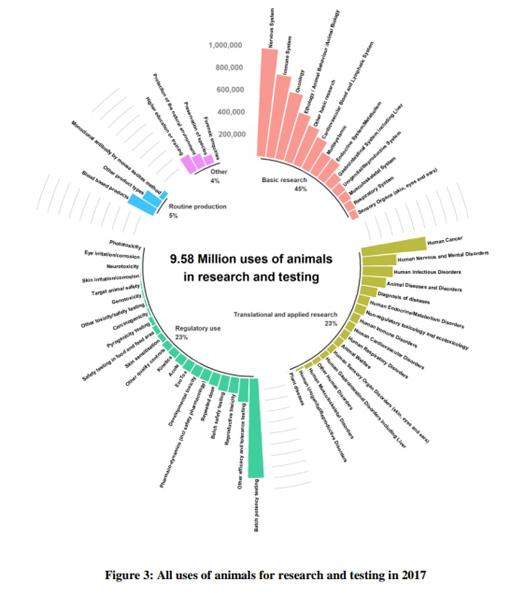 The total number of animals used in research across the 28 EU member states in 2015, 2016 and 2017 was below 10 million each year, with the last recorded figure for 2017 around 9.39 million. In 2008, the reported total figure across 27 member states was just over 12 million animals and in 2011, just under 11.5 million. This supports the report’s suggestion that the total number of animals being used in research is falling.

Of the 9.39 million animals used in 2017, 61% were mice, with the next most used animals being fish (13%), and then rats (12%). Worryingly, there has been a 15% increase in the use of non-human primates (NHPs) across the three years. The most popular being the Cynomolgus monkey, where 7,227 individuals were used in procedures in 2017. The EU Directive requires NHPs to be bred in captivity and in self-sustaining colonies where previously they may have been obtained from the wild. According to the Report, no NHPs used in research during 2017 were captured from the wild.

The Report also collected information about the origins of these animals and where they are bred. 90% of the animals used were bred and obtained from registered breeders within the EU. This information is important as, for wild animals, a laboratory setting will have a greater impact on welfare and levels of stress. There are also potential welfare implications when importing animals that travel long distances from outside the EU. The report highlights that one animal commonly sourced from outside of the EU is bats.

The UK has the highest number of animal uses, recorded at 1.8 million, closely followed by Germany, then France, both at around 1.7 million uses of animals with the rest of the member states falling significantly below this.

Purpose and severity of procedures

In 2017, the total number of uses of animals for scientific purposes (including reuse), was 9.58 million. Of these uses, 69% were for research and 23% for regulatory use to satisfy legislative requirements.

This meant that there were 2.18 million uses of animals in regulatory testing procedures to satisfy requirements under specific EU legislation in 2017. The main use of animals here occurred for medicinal products for humans (61%), veterinary medicinal products (15%) and industrial chemicals (11%). The figures indicate that there has been an increase in animal use for testing medical device legislation and chemical legislation. Within these regulatory uses of animals, over half (52%) were related to quality control (including batch and potency testing) and 39% for toxicity and other safety testing including pharmacology. 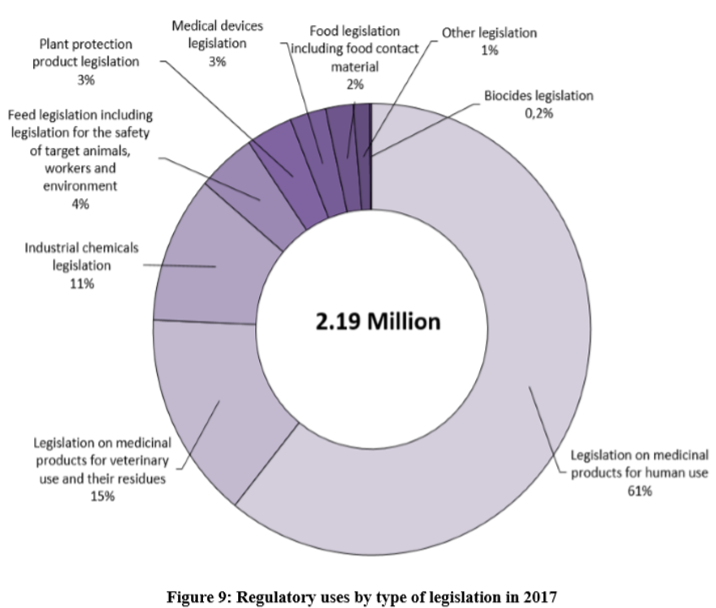 Numbers of animal uses for research are much higher, with 4.3 million uses of animals for basic research across the EU in 2017 and around 2.2 million for translational and applied research. Basic research is designed to study the structure, functioning and behaviour of living organisms. Translational and applied research study human and animal diseases, including experiments to develop drugs and treatments. Here, the main areas of human research where animals were used were cancer, infectious disorders and nervous system and mental disorders.

The latest EU Directive also requires countries to report on the severity experienced by an animal when used in a procedure, as the UK does annually in its Home Office statistics. In 2017, around half the animals (51%) used experienced ‘mild’ suffering whilst 11%, which equates to around 1 million animals, experienced uses or procedures classified as ‘severe.’

The total number of animals used in the creation and maintenance of GA lines stood at around 1.5 million in 2015 and dropped slightly to around 1.2 million in 2017.

In 2017, there were 2.59 million total recorded uses of genetically altered animals for the purposes of research, of which 17% exhibited a harmful phenotypic alteration, meaning they exhibited pain, suffering, distress or lasting harm because of the change to their genes. Zebra fish and mice were the most commonly used GA species.

Animal use: thoughts for the future

FRAME Scientific Liaison Officer, Amy Beale concludes: “It is encouraging to see that the overall number of animals used in research across the EU is falling, however there are areas where numbers seem unnecessarily high. Worryingly, in 2017, there were 2.59 million recorded uses of genetically altered animals for the purposes of research. In many cases, a genetically altered mouse may not provide as much useful insight into a human disease as a human-based model, plus there are welfare concerns that suffering can occur when inducing certain genetic defects.

“It is also concerning that animals are being used for tests where there are already alternative, non-animal methods that have regulatory acceptance available,” Amy explains, “including human safety tests for skin irritation, eye irritation and pyrogenicity testing. It is already proven that regulatory testing for human adverse effects of cosmetics and household products can be done without animals, and countries should be doing more to ensure alternatives are always used when they are available.

“The additional information included in the 2019 Report provides greater transparency around the use of animals in research and testing across the EU, which is particularly important if we want to make more changes and target improvements in the Three Rs initiatives and training. For example, this might include looking at refining the severity of certain procedures or reducing the number of animals used in creating new GA lines for studying some human diseases.”

Amy adds: “Human-relevant in vitro cell and computer models continue to be developed and improved and we hope to see this reflected in the number of animals used in basic, translational and applied research in the future.”

Read the 2019 report by the European Commission here