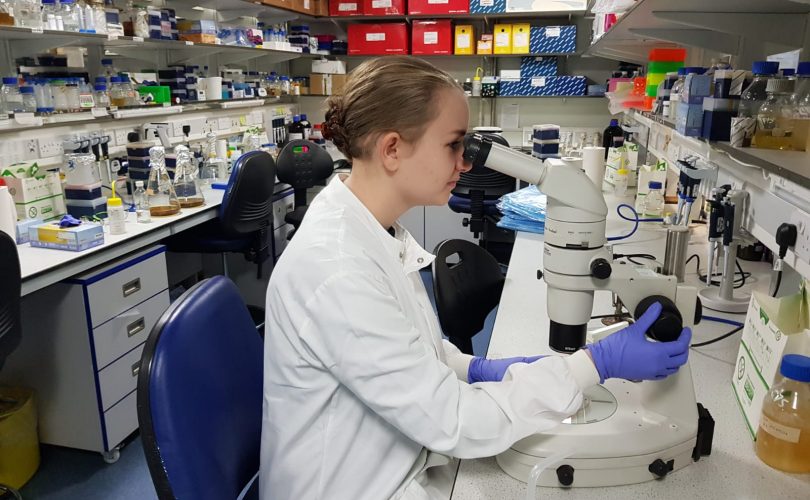 Researchers at the FRAME Alternatives Laboratory are part of a collaboration that aims to elucidate how obesity leads to accelerated muscle loss, and their findings have recently been published in Scientific Reports.1

After middle age, individuals lose an average of 3% of their muscle strength every year in a process  known as sarcopenia, or age-related muscle loss.2 This is a common part of the ageing process but problems arise when muscle loss is accelerated by things such as inactivity or long-term medical conditions, resulting in a significant loss of mobility and strength. Sarcopenia is also a major factor in frailty, putting elderly people at risk of falls, disability, and needing long term care.3

Whilst some causes of sarcopenia are a natural consequence of ageing, others are preventable. For example, muscle loss is known to be greater in obese than non-obese older people in an association known as sarcopenic obesity.4 The term obese is used to describe someone who is carrying a lot of excess fat, known as adipose tissue, and it is estimated to describe 1 in 4 adults in the UK. Obesity can lead to a number of significant health conditions including type 2 diabetes, heart disease and certain types of cancer. Despite this global obesity levels are increasing, with no signs of slowing down.5

When the health effects of obesity and sarcopenia are combined, it is clear that sarcopenic obesity represents a significant public health concern. Despite this, there is still a lot unknown about this condition and much of the research has focused on visceral adipose tissue, which is the fat concentrated in the abdomen and around internal organs. However, the majority of fat mass in the body is in subcutaneous adipose tissue, the fat layer under the skin, but there has been little work focusing on this.

The research published in Scientific Reports focused on the contribution of subcutaneous adipose tissue to sarcopenia. Using tissue from human donors, they were able to demonstrate that signals released by fat cells negatively affect the development of skeletal muscle cells. In particular, a substance known as Resistin that is secreted in large amounts from subcutaneous fat cells was shown to impair the progression of muscle cells into mature muscle fibres. The research also demonstrated that old muscle is more susceptible to these negative effects than muscle from younger donors. These findings could lead to future treatments and have important implications for the maintenance of muscle mass in obese older people.

FRAME champions the animal free approach taken to this research, and it demonstrates how much can be achieved with cell-based studies alone. The tissue used was obtained from human volunteers, either from a small thigh muscle biopsy or surplus adipose tissue from elective surgery. Although there are a number of mouse models of obesity already established6, they fail to replicate the complexity of a human system. As such, results often correlate poorly to humans and small changes in experimental design can offer significantly different results. Therefore, using cell-based systems not only avoids unnecessary animal experiments and the associated ethical concerns, but also provides results that more accurately translate into humans.

This study represents the type of experimental design FRAME would like to see become more common, replacing the need for animals in science without compromising on scientific progress.

This article was written by University of Nottingham student, Clair Brooks, as part of her PhD Internship. Read more about Clair’s placement with FRAME here.